Guntur, the largest city in Guntur district, is surrounded by hills in the suburban areas. Krishna river is the main river here along with other channels and tributaries such as Naaguleru, Gundlavagu, Guntur Channel, Golivagu, Guntur Branch Canal,  Dandivagu and Chandravanka. The stream channels and sand bars are testimony to the fact that Krishna river flows through plains in this part, carrying large volumes of sediment during rainy season. 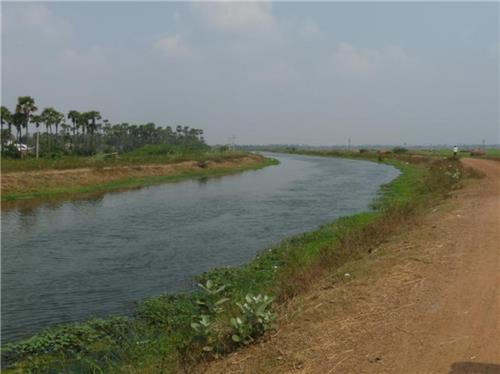 Krishna river enters Guntur district near South-west region of Macherla range in the vicinity of Ganikonda hills. Drainage facilities in Guntur district include the Romperu drainage basin, the Repalle drain, the Tungabhadra drain and the Bhattiprolu drain.

The rainy season in June witnesses a spurt of storms and hurricanes. Mostly, the hurricanes occur most likely between months of May and November though there are few spells all around the year too.
The highest rainfall recorded was 386 mm at Sattenapalli on 19th of November, 1879.

Guntur experiences a tropical climate. It is warm throughout the year with May or June recording the maximum temperatures. The winter season commences in October and extends up to February. July has the maximum rains in Guntur.

Nallamalasis (Kurnool district), Venkatayapalem range (composed of slate and quartzite) and Kondavedu hills (composed of granite rock) are hills in and around Guntur district. Other hills include Guttikonda, Mangalagiri and Undavalli hill range.

Four types of soils are found around this district which include:

The black cotton soil is found in Guntur city. Satenapalli and Macherla (Northern parts) too comprise of black soil.